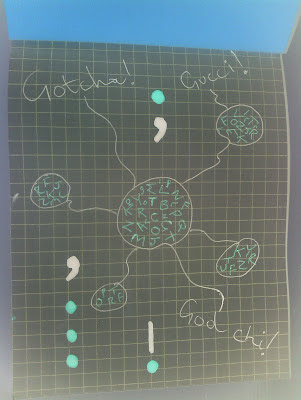 I solarised the above little sketch because it's really about being in the grip of something, being a subset of something, and so it kind of reminded me of schooling and that old chalkboard which has now disappeared from our classrooms. It's also about the shadow side of our existence, or what is hidden behind our eyes, behind the material world, behind the blackboard where the teacher keeps the chalk.
Posted by Stephen Nelson at 12:11 No comments:

alarming.
Posted by Stephen Nelson at 16:56 No comments: 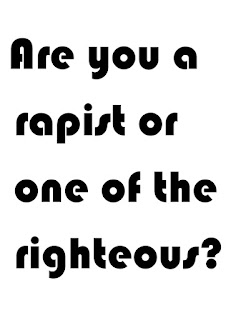 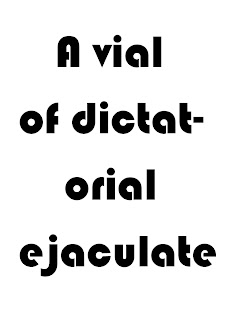 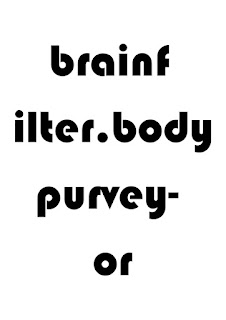 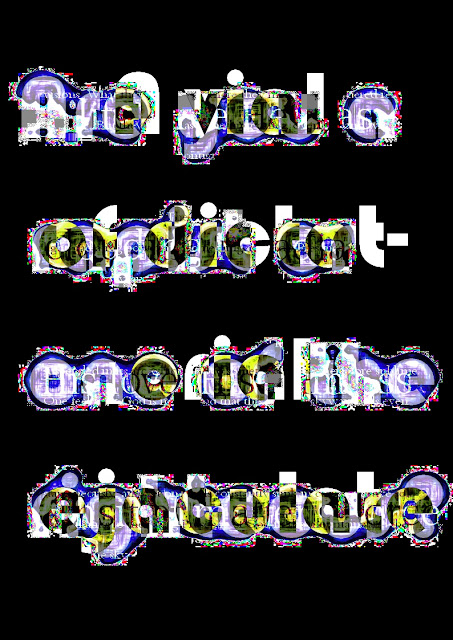 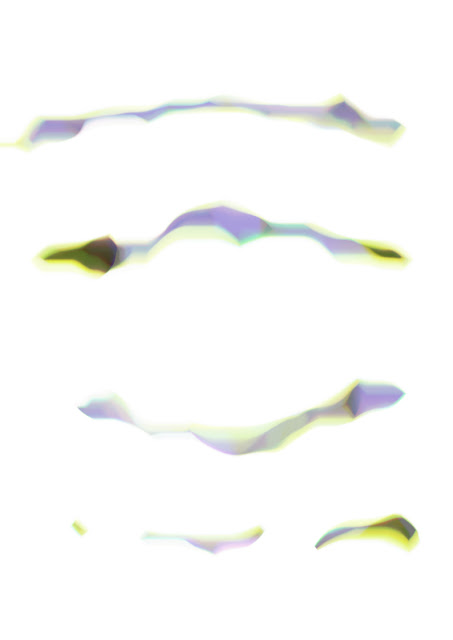 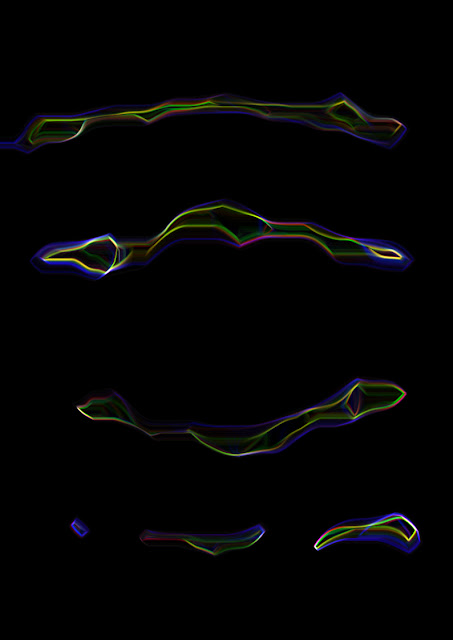 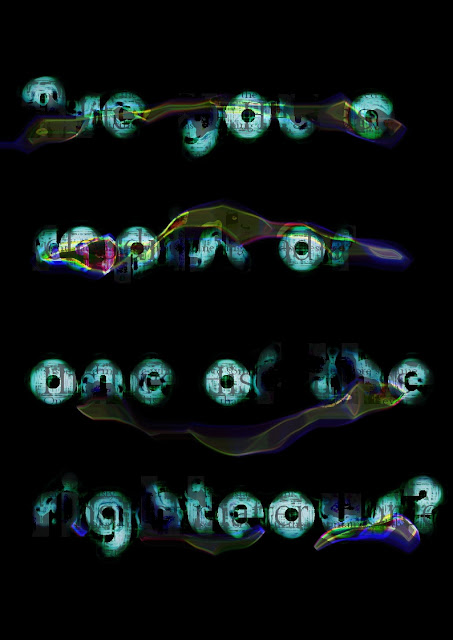 Posted by Stephen Nelson at 19:38 No comments: 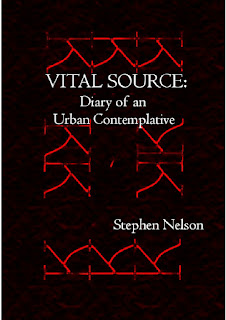 For anyone interested in contemplative prayer or Christian spirituality, I've published, perhaps rather hastily given my technological incompetence, an ebook called Vital Source: Diary of an Urban Contemplative. It's part prayer journal, part spiritual autobiography. Formatting these things is a bit of a nightmare but I don't think the reading experience will be too diminished by the glitches. At any rate, if it's at all your thing, I hope you enjoy it. It's fairly cheap and Kindle friendly.
Posted by Stephen Nelson at 17:47 No comments:

Some questions for you to ponder, or ignore, whichever you prefer:

Why are we born into the circumstances we are born into, given the parents we are given, brought up in one particular time or place as opposed to another? How can we deal with those circumstances, however difficult, in a way that allows us to make sense of them, make sense of ourselves? How can we emerge from these circumstances with a genuine and intact sense of Self, a truth and honesty in our Being which allows us to accept them and transcend them and find, well, a serious slice of inner contentment?


Maybe these questions aren’t important to you. Maybe the mere act of survival is enough. Maybe you just want to get from the cradle to the grave relatively unscathed. Or maybe you just want to escape these pesky circumstances, surround yourself with nice things and respectable people, wealth, learning, in a bid to protect yourself from the crazy filthy mess of the crazy filthy world. Fine. Lovely. But for me, and I’m guessing for someone like Bobby Parker, that just isn’t enough, because to ignore these questions doesn’t chime with a sense of who we actually are. Even in the midst of the crack blown shitstorm, Bobby says:


“I lived to score. It gave my life meaning.”


Simple. To the point. In actual fact, Bobby writes the way I thought I might like to write when I first started writing. I have a few early short stories which wander into Bobby Parker territory, but they don’t quite cut it, probably because the crazy filthy world they explore was only at the edge of my experience until my late teens, when I drifted into it in order to “find something other”, sheltered as I was in a happy homey Christian dream bubble (which I’m entirely grateful for now, btw). For Parker, however, this world has been internalised since day one, crystallised in a sensitive, honest mind, and poured out in some of the cleanest writing out there. Clean?


“GIRLS WHO
DROVE ME
CRAZY


BOYS WHO
SHOWED ME
THEIR COCKS”


This, handwritten on a dirty post it note. It’s the honesty that’s clean, the straight-to-the-point directness. There’s no judgement. This is the world as it is without frill or pretty cover up. It’s like the Hindu tantrics who break all kinds of social and sexual taboos to find liberation. Parker and the characters who populate his prose poems and handwritten miniatures simply live, even embrace, their vice, perversion, habit, addiction, squalor, and by doing so, gain some control over their lives. Like Stabby Jim, who steals and wears soiled undergarments before masturbating into them, or Bobby and his friend who enjoy sparking up matches because:


“Every strike seemed to make sense, the flare and stink of them. Flicking them still lit into rubbish bins to start little fires. Something we could control.”


Control here is a form of liberation, a way of making meaning, sense. At other times the characters offer a poignant memory which gives life meaning:


“It seems that Liam’s crying filled my childhood just as much as much as the sound of church bells or ice cream vans.”


Or, sometimes, refuge from the pain:


“Until Gemma’s cool hands closed over my knuckles. Until her warm mouth touched my runny nose and called me sugar in the dark.”


Occasionally however, this sense of liberation becomes complete, reaching spiritual heights or moments of elevated consciousness, as in the post it note poem, scrawled and scored out before the declaration that:


“GOD IS THAT
FEELING I GET
SOMETIMES”.


“For the first time since we moved here, I noticed how loud the fan on the bathroom ceiling was. How much it sounded like a voice.”


Or consider the poem where an intense emotional breakdown leads to the poignancy and heightened sentiment of intimate contact with his daughter:


“I nodded through the fear and held out my cartoon hands for the sunshine.”


Occasionally, the supernatural breaks through the fear and shame altogether, like the poem where Parker’s anxiety about his daughter’s birth is calmed by a ragged stranger with “eyes like snow globes” and a bus driver called Gabriel.


Make no mistake, the humiliation and guilt flattens him “like the consequences of a terrible lie”, he feels “like a clown with a virus”; but it’s precisely this humiliation and guilt, disappointment even, which, when it hits fever pitch, breaks into moments of complete realisation and transcendence:


“We stopped in the middle of our game and took turns blowing cigarette smoke into the sunbeam. Ghosts in the gold light. ‘Fucking beautiful . . .’ I whispered.”


I’m a big fan of Stanislav Grof’s perinatal theories, where he postulates that the child’s journey from the womb through the birth canal into the world forms a blueprint or frame of reference for our psychological journey through life. Don’t worry, I’m not going to psychoanalyse Bobby, and there’s a lot more to the theory than I can explain here, but I do see the experiences Parker describes as analogous to the traumatic journey to new birth. The book finishes with a dramatic explosion of light as our eyes see who we are or what we can really be:


Before this however we are faced with the emotional appeal:

I’m not sure where Bobby is in his journey and whether or not he’s heading out of the darkness towards the light. His writing about it is a way of liberating himself from the pain, which in itself suggests a way into something more precious. Wherever he is, I’m glad to be his companion along the way.

http://www.knivesforksandspoonspress.co.uk/comberton.html
Posted by Stephen Nelson at 19:30 No comments: 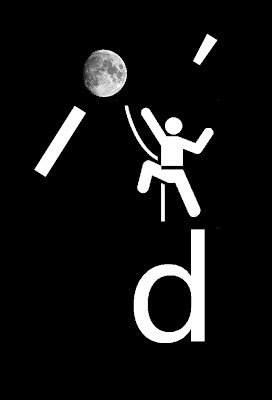 Posted by Stephen Nelson at 19:24 No comments: