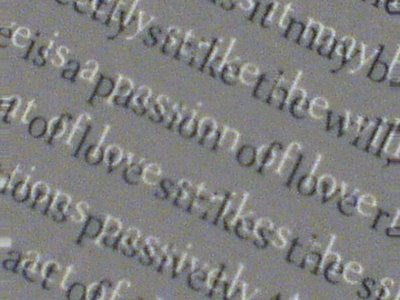 Words are visions, ghosts, apparitions. They float free from the page, loosen themselves from the bonds of physicality, appear as floating forms in a dream. They conjur spirits, brew potions, mix spells - and I'm not talking about meaning.

I enjoy the shape of words, their materiality. I like how those shapes form in the mind, float in the imagination and transform into new and different shapes on a page or screen. Those shapes are powerful. They are psychic phenomena on a par with levitation. To meditate on the shape of a word alters consciousness as radically as any drug. The imagination is inflamed, the spirit enlivened, physicality altered, our own bodies re-aligned.

So then words are part spirit, part flesh, corporeal and incorporeal, substantial and insubstantial. The shape of a word is concrete, but also hallucinatory.

Last night I had a dream about the letter 'g'. It floated against a white background, multiplied, became a gaggle of 'g's with the texture and shape of dreamstuff, a dream poem. It reminded me that form exists in the mind before it takes shape on a page or screen or side of building. Form is originally insubstantial, it takes an act of will, an effort to create substance.

These poems are offered as hallucinations. They are the beginning of an attempt to explore psychic materiality. I want to explore a lot of things. But I want to explore psychic materiality because it happens in my imagination on a daily/nightly basis. Who knows what the fruits of that exploration will be on the page or screen. It seems important that they're expressed on the screen because they will be like televisual images - ghosts, dreams, a trick of the light. Perhaps they'll never get out of my dreams, my imagination. In which case, you'll just have to take my word for it that they exist.