The Alien in my Bookcase 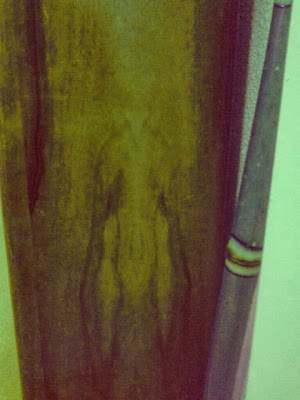 There were certain preliminaries. That walk through a stone field at night lit by stars, the north blazing. A craft circling the sky, breathtaking geomotion, beyond craft, dipping down behind the house in joyful dark. The surprise of a crystalline psyche. Immediate transport. Witness to invisibility, the gravitational attraction of objects orbiting an easy chair, plastic floating Eucharistic wafer. I am called to the ceiling, to hover, a shamanic dragonfly.


If I invite the Milky Way
into my living room,
it’s not because the lighting
is so precious.
I’ll always siphon magic
from a dolphin teat,
juggle poltergeist
through esoteric fingers.


For days the dead seagull
lay on the road, its soul
hovering in Disney time,
aching to be redrawn.
Astral travel isn't liturgical,
but there are nooks in my mind
where they've dropped
hooks for mystical fish.


We'll get reacquainted
with the hub of the galactic
wheel. It's my intuitive chest.
Our dreams are a hive
for umbilical visitation. Unkill
complacency. Spindly
purpose has limbs
precise like buttered bread.


The ascent then, while governments pump instruction. Bright all of a sudden, white path vista of an ocean spreading, spreading, faux glorious. Ecstatic suggestion. I am handed model submarines on a wooden jetty. Some I reject without consideration, but am left with the choice of two, "Moon" and "Christian". I choose moon because I know I am a Christian and there is no guilt and fear is pecked away by crows.


The underwater hub is an accelerated bureaucracy, frozen charity, ink and paper flesh. I constantly reaffirm reality by testing the solidity of objects, a firm comprehension of the edge. Moving then through a thriving compound. Someone is assigned to me. I must sign up for abduction, before the shocking formality of introductions. What does one say as planetary host?


*
The problem is more complex than conspiracy will allow, requires full brain rendering and resolution. Immediacy. Swifts in the skull. Nor am I immune to the dilemma of another, but am, simply, sparkling turquoise eloquent, and yellow. Full brain Brahmin. Silence saves the raft from sinking, so we must be silent.


A picturesque carnival prohibits sleep. Creeping alien entity. Bone chill. Corridors, highways, and a speeding van. Previously, in dreamtime, I’m on an open road, carefully sifting ambiguity through my fingers, wilfully blocking dissent, even at traffic lights. I challenge a vertical motorway, power at its limit, but up, and over, into a nightclub, glamour girl splendour with a hint of doubt, a tinge of moral uncertainty. She’s there. Short blonde hair. I’ll come back to her.

The entertainer, one Alphonse Capone, sidles up with song, challenges choice, tells me I’ll fly but governments lie. It’s a cover up. Exit blocked by threat of disabled children closing ranks, growling from metallic wheelchairs. Outside the road is shining ribbons. Clarity, more liquid than infrastructure. The problem resolved in purple light.


They give gifts of lilac and parsley
strung on ESP bubbles of cold mouth.
Oriental fragrances are used as
optional palliatives against torture.
Too late to sink the stars in tears,
their eyes are ice floes watching.


*
They want to study orgasm, tell me they are love. So we simulate sex in a psychic vortex, as we’ve done for a while now without their attention. I knew I’d come back to you. You are my co-host, my radio love. Let me ask you now, do they nurture bliss?

Creeping meat dreams prefigure flight, endless stratospheric swoop. For the moment they remain unseen, gauging reactions from the shadows. I am infinitely versatile, a lover, a runner, a boxer championing Jehovah of Hosts.


Complex puzzles are presented to my eye on waking. I am sleepy and determined to resist. Morning is a labyrinth of dream memory. One door opens on a landscape bursting with cartoon colour, as vivid as 3D war games. Lasers zap across the sky, jets attack UFOs, energy globes circle and pulsate. People on the ground scatter and flee but are caught in galactic crossfire. I have a family I must lead to safety through a boyhood memory. No one escapes the stellar blaze. All this is a test, a monitoring of mental responses through varying states of consciousness. Quite frankly, I am unimpressed. Totally blasé. My day will be as pallid as bureaucracy.
Posted by Stephen Nelson at 18:57